To share your memory on the wall of Albert Poe, sign in using one of the following options:

Provide comfort for the family of Albert Poe with a meaningful gesture of sympathy.

Age 89, of Moorestown, NJ, passed away peacefully at home surrounded by loving family on August 9, 2019, from heart failure. He was born on October 14, 1929, to the late Albert and Louise (nee Hargraves) Poe... Read More
Poe

Age 89, of Moorestown, NJ, passed away peacefully at home surrounded by loving family on August 9, 2019, from heart failure. He was born on October 14, 1929, to the late Albert and Louise (nee Hargraves) Poe of Baytown, Texas. He was born in Louisiana and grew up in Louisiana and Texas. He enlisted in the Marine Corps at age 19 and served for 21 years, retiring as a Gunnery Sergeant. During his enlistment, he served overseas during the Korean and Vietnam Wars. In 1969, courtesy of the US Marine Corps, he moved his family from southern California to Moorestown, NJ, where he retired from the Marine Corps in Philadelphia. Following his first retirement, he became a floor plan checker for Peirce Phelps where he worked for 20 years. During this time, he received a Bachelor’s degree from Rider College in New Jersey. Aside from serving his country and being a devoted husband and father to his two children, he was a faithful volunteer to causes in which he believed. He was president of the East Barstow Elementary School PTA in Barstow, CA and a manager of the local Baseball Federation in Moorestown, NJ. For several years, he donated platelets during the pioneer years of platelet donation at Fitzgerald Mercy Hospital. Following his retirement from Peirce Phelps, he became a faithful volunteer at the Lutheran Home in Moorestown for many years. He was an ardent traveler, first with his family and later with only his wife, having visited 49 of the 50 states, as well as several countries. His peaceful passing was made possible by the Hospice of Moorestown VNA and Shanta from Home Instead.

He was predeceased by his parents, four sisters and two brothers and one son (John Allen). He is survived by his loving wife of 62 years Donna (nee Mayes), daughter Marilynn Murphy (Martin), grandchildren, Brian Albert and Eleanor Louise, as well as numerous nieces and nephews. He will be dearly missed by the lives he touched.

A visitation will be held on Thursday, August 15, from 5:30 to 6:30 PM, followed immediately by a 6:30 memorial service, both at the Mount Laurel Home for Funerals, 212 Ark Road, Mount Laurel.

In lieu of flowers, the family has requested donations to the Fraternal Order of Police Lodge #109, P.O. Box 645, Moorestown, NJ 08057.
Read Less

We encourage you to share your most beloved memories of Albert here, so that the family and other loved ones can always see it. You can upload cherished photographs, or share your favorite stories, and can even comment on those shared by others.

Posted Aug 12, 2019 at 06:49pm
Condolences to you, Donna and Marilyn. Uncle Buddy was a great man and it is an honor for me to be able to call him "Uncle." -- Mary Martin Arnold, daughter of Fannye Poe.
Comment Share
Share via: 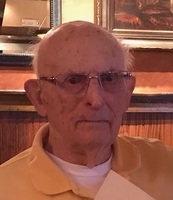