To share your memory on the wall of Alice Vance, sign in using one of the following options:

Provide comfort for the family of Alice Vance with a meaningful gesture of sympathy.

Print
Alice Myrtle Vance (nee Dey), age 90, of Cherry Hill, NJ passed into the arms of her Savior while surrounded by the love of her family on November 12, 2019.

Alice was born in Philadelphia, PA on Feb 11 1929, and was raised in Yeadon, PA,... Read More
Alice Myrtle Vance (nee Dey), age 90, of Cherry Hill, NJ passed into the arms of her Savior while surrounded by the love of her family on November 12, 2019.

Alice was born in Philadelphia, PA on Feb 11 1929, and was raised in Yeadon, PA, graduating from Yeadon High in 1947 before attending Taylor Business School in Philadelphia. She married the Love of her life, Bob, on August 6, 1949 and they raised their family in Glenolden, PA.

Alice was first and foremost a loving Mom and Wife. Loving and serving her family heroically for 70 years.
Family was always her priority, however Alice had many other interests that she diligently pursued. She was very involved in her Church (First Presbyterian Church in Glenolden), serving tirelessly in a number of roles such as, Sunday School Teacher, Piano/Organ Player, Choir Participant, Leader of Women’s groups, secretary of meetings, as well as an Elder in later years. She served her Church family with the same joy and enthusiasm she served her own family. This was also demonstrated in her service as a Girl Scout leader, where she, along with her friend Paulene Waters, invested in the next generation of young ladies.

Alice was musically gifted! Learning to read music and play the piano as a child, she used her gifts and talents to delight her family (often playing along-side her husband, Bob at family gatherings) as well as an occasional organist at Church.

By far Alice's musical passion was in playing and teaching Bells. Her husband Bob, who was instrumental in getting those heavy bells to and from events, often affectionately referred to the bell ringers, as "Ding Dongs". Most noteworthy, Alice developed a group of bell ringers at the Blind Center in Chester, PA... Directing an entire group of blind men and women in making majestic music with those bells. I am certain Heaven heard it and I can imagine her in heaven now joining the bell ringers, or should I say "Ding Dongs"!

After supporting her Husband’s passion for building an airplane in their garage with his 4 brothers, Alice bravely supported him in the air. Copiloting in his yellow flying machine. Going on short trips for lunch as well as few long trips to visit friends and family. Alice was not so much about loving flying, but about loving her husband and putting his joy above her own. Together they attended many Fly-ins, Air shows and were members of the Christian Pilots Organization.

In addition to all of this, Alice worked outside the home after the children were grown. Most days walking the few miles to the Sears catalogue pick-up store in Norwood, Pa for several years. There Alice had several responsibilities; taking phone orders, operating the register as well as administrative duties.
If Alice had any spare time she loved to read, was an amateur photographer, a seamstress, and a fabulous cook!

Even as Alice was diagnosed with Alzheimer’s Disease 10 years ago, she was always very happy, had the sweetest countenance and a continuous smile. She will be missed beyond measure here, but heaven is now rejoicing and so is Mom.

Thank you for taking the time to read about my sweet and much loved Mom....We will be having a very informal Memorial Open House on Saturday November 30 from 12-5pm at her Daughter's Cherry Hill home.

We encourage you to share your most beloved memories of Alice here, so that the family and other loved ones can always see it. You can upload cherished photographs, or share your favorite stories, and can even comment on those shared by others. 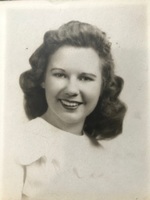