To share your memory on the wall of Carleton McKenzie, sign in using one of the following options:

Carleton was devoted to his Christian faith and was a dedicated member of Christian Cultural
Center in Brooklyn, NY where he attended Sunday services regularly. After church he often
returned home to listen to traditional hymns sung by Elvis Presley and Jim Reeves. In his
leisure, he enjoyed watching movies, dancing, listening to music, cooking, eating good food,
going on walks, and discussing politics with just about anyone who would engage him. His
most cherished joys were playing with his grandkids and spending time with family and
friends, who will miss him dearly.

As a young man in Belize, Carleton was known as a great athlete, and excelled in basketball.
He studied at Lynam Agricultural College, and after graduation he worked as a Malaria
Eradicator for the Cayo District, ultimately becoming a Senior Malaria Evaluator. He would
also go on to become a successful entrepreneur, owning a trucking business in San Ignacio
and a restaurant in Santa Elena named Carl’s Bar, which was known for its cozy ambiance and
cordial atmosphere. An excellent cook, people would frequently stop by for some of
Carleton’s famous barbeque and homemade tortillas.

He also loved his sons-in-law, who saw him as a father figure and friend. Carleton was proud of
the marriage choices his daughters made. He would often have his sons-in-law over for his
signature fried beans breakfast and coffee, all the while offering advice, chatting away, and
sharing funny jokes in his native Belizean creole. Carleton absolutely adored his grandchildren,
creating endearing nick names for them in their early years, and going on to attend track meets,
recitals, and graduations as they grew up. To his siblings, as the eldest among them he was
always there as a support in times of need, and to share their joy in times of celebration. To his
friends, Carleton was a dependable ally and gracious host, known for throwing fabulous and
meticulously planned dinner and dance parties at his home.

Professionally, Carleton was a building manager for Pritchard Industries for over 20 years, most
recently at the 1745 Broadway site in Manhattan. Carleton served his company with integrity and
was known as a calm and reliable manager and problem solver. He was a compassionate leader
and supervised his team with a balance of support and high expectations.

Above and beyond his professional and entrepreneurial achievements, Carleton believed that his
greatest accomplishment in this world could be seen in the successful, productive, and loving
lives of his five children. At the same time, it is Carleton’s own life, love, and power that continues
to inspire them also. They know that they are because he was. His bright light and legacy now
shine within and through his children and his children’s children.

To his wife, Rosa, whom he affectionately called “mi amor,” Carleton was dedicated, kind, and
loving. He enjoyed nothing more than spending time, dancing, and traveling with her. Rosa
brought true joy to Carleton’s life and was a blessing to his family. To his five children,
Carleton was a strong example of God’s fatherly leadership and love. He led his family with a
firm yet caring hand, balancing fun and laughter with discipline and structure. He always
encouraged his children to try their best in whatever they did. To his only son, Alister, he was
a best friend and confidant. To his daughters he was a caring provider and was highly
sensitive to their feelings and needs.

Due to the current circumstances and at the request of the family, his services will be private.
They will, however, be streamed on Sunday, April 19th at 6pm EDT. Memorial gifts can be sent by
mail to Rosa Estupinan at 1601-10 Johnson Avenue, Elmont NY 11003.
Read Less

Receive notifications about information and event scheduling for Carleton

We encourage you to share your most beloved memories of Carleton here, so that the family and other loved ones can always see it. You can upload cherished photographs, or share your favorite stories, and can even comment on those shared by others. 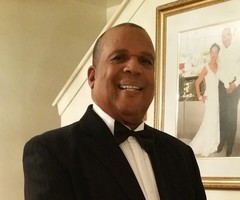