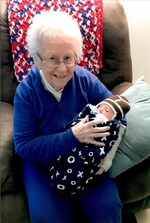 Catherine Margaret Mann (nee Kane), Marcy as she was known, of Willingboro, died Saturday, May 1, 2021 at her daughter and son-in-law’s home in Burlington at the age of 95.

Born December 9, 1925 in Philadelphia, PA to the late John and Catherine Kane (Cannon). One of ten children, Marcy was predeceased by her sisters Marie, Theresa, Frances, Anna, and her brothers John, Mickey, and James. Marcy graduated from West Catholic Girls School in Philadelphia. Marcy married her husband Tom on August 19, 1950. Marcy worked at Woolco Dept. Stores, K-Mart Stores, and H & R Block. She belonged to the Altar and Rosary Society at Corpus Christi Church in Willingboro where she was a long-time parishioner and was an avid volunteer at Corpus Christi School when her children were attending there. She was a volunteer with The Black Watch Drum and Bugle Corp and all the sports that her kids participated in. In recent years, Marcy was an active Pioneer partner with the New Vision TelecomPioneers.

In lieu of flowers, donations in memory of Marcy may be made to Corpus Christi Catholic Church at the following link:
https://www.ccnj.church/online-giving