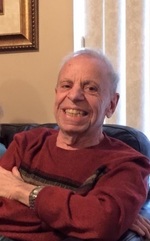 Dr. Kushner was born and raised in Philadelphia, PA before moving to Marlton in 2015. He was extremely passionate about education, devoting his life to teaching. He was known for making a huge impact in his student’s lives. He also had a thirst for knowledge, ultimately achieving his Doctorate in Urban Education. Jerry had a wonderful sense of humor and would always light up the room with his bright smile. Above all, Jerry cherished spending time with his wife of over 60 years, Rhoda, as well as his children and grandchildren and will be deeply missed by those he leaves behind.

A visitation will be held on Thursday, December 12th from 11:00 to 12:00 PM immediately followed by the memorial service, both at the Mount Laurel Home for Funerals, 212 Ark Road, Mount Laurel, NJ. Interment will follow at Locustwood Cemetery, 1500 Marlton Pike West, Cherry Hill, NJ 08002. After the interment, everyone is invited back to Laurie Korth's residence for a gathering and a Shiva Minyan beginning at 6:30 PM. In lieu of flowers, memorial contributions in Gerald’s name may be made to Friends of Sheba Medical Center/Alzheimer’s Research, 9465 Wilshire Blvd, Suite 300, Beverly Hills, CA 90212 or to the Alzheimer’s Association by going to: