To share your memory on the wall of Henry Huston, sign in using one of the following options:

Provide comfort for the family of Henry Huston with a meaningful gesture of sympathy.

Mr. Huston was born in Philadelphia, Pennsylvania to Henry T. Huston, Sr. and Lucille Huston (nee Dietrich). He served his c... Read More
Henry T. Huston, Jr. of Burlington, New Jersey, passed away on Saturday, May 16, 2020. He was 70 years of age.

Mr. Huston was born in Philadelphia, Pennsylvania to Henry T. Huston, Sr. and Lucille Huston (nee Dietrich). He served his country honorably, in the United States Army, during the Vietnam War. After his military service, he worked as a pipe fitter, at the US Navy Yard, in Philadelphia.

At the request of the family, all services will be private.
Read Less

Receive notifications about information and event scheduling for Henry

We encourage you to share your most beloved memories of Henry here, so that the family and other loved ones can always see it. You can upload cherished photographs, or share your favorite stories, and can even comment on those shared by others.

Olive- thank you for being a true friend all these years and for your generous gift of planting the tree in Sam’s memory.
LN

Posted May 19, 2020 at 02:39pm
I remember Sam always with a smile and laughing. I know he loved Angie from the moment he met her as she did too. He was happy with Shirley and made a great family. I wish the family comfort and peace and to hold onto good memories.
Linda Nazworth .

Thank you Aunt Linda. So true. Love you!
S

Linda - thank you for reaching out durning a time of sorrow. Think of you often - sending love to you, Jeanie and David and families 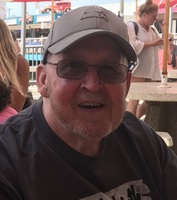