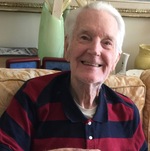 James Joseph Duffy – the man, the myth, the legend.

James Joseph Duffy, age 90, passed away very peacefully on January 16, 2020, six days after marking his ninetieth birthday. He was surrounded by his loving family and at the moment of his passing his theme song. “Lean on Me” was playing followed by the Song of Farewell, bidding the Saints and Angels to lead him home.

He was born to Luke and Mary Duffy on January 10, 1930. A proud New York City native, he was raised on Amsterdam Ave and grew up working in Duffy Brothers, the family grocery store. As the middle son, he learned the importance of family bonds from his parents and his siblings John, Peggy, Peter, Agnes and Joan. He took his New York City credibility to a new level by attending school in four of New York City’s five boroughs; St. Gregory the Great grammar school in Manhattan, Cardinal Hayes High School in the Bronx and St. John’s University in Brooklyn and Queens.

His life was made complete when he married the love of his life, Barbara Beyer on November 9, 1957. They lived a love story, which is the stuff of legends, and their devotion to each other was a marvel to behold. They had six children and six grandchildren and his pride in each of their accomplishments, both large and small was boundless. This was all too apparent to friends and associates who were often regaled with stories of academic and athletic triumphs.

He served in the Counter Intelligence Corp of the US Army. As a member of this select group of service men he was assigned to guard sensitive World War II records and as his alter ego Johan Dudek, he posed as a German native, tasked with infiltrating communist organizations. As part of his CIC training he became fluent in German, which was very handy in future business endeavors. Especially when he was participating in negotiations with German-speaking business associates who were not aware he understood every word they said.

An accomplished businessman, James was an Executive Vice President with Esquire, Inc. and a long-time president and CEO of Precise International.

A gifted athlete, he played basketball in College, semi-pro football for the Blakey Democratic Club In New York City and was on the champion US Army Volleyball team. He continued to pursue his love of sports as a skier and golfer. He later coached several little league and basketball teams on which his children played and famously lead the St. Elizabeth’s, Wyckoff CYO High School Girls Basketball team to an undefeated season and the Bergen County Championship in 1978.

He was an avid New York Giant fan and even after moving to Eagles territory in South Jersey he proudly wore his Giants garb – especially on game days.

He also fiercely loved his animal family members and they loved him back. We are comforted to know he is now reunited with and taking walks with his Labrador Retriever best friends Dublin, Dillion, and Seamus and his black cat, Omen.

He was a voracious reader with a whip smart wit and an astounding command of world and US history. His delight in bad puns and “dad jokes”, and his insatiable sweet tooth are carried on in some of his children and grandchildren (names withheld ~ you know who you are!)

A master storyteller, he inherited the Irish gift of spinning a yarn. His stories were entertaining, compelling, and funny, even if at time you had to question if some of the facts were sacrificed in service of a better story.

He was a devout Catholic and a daily communicant for many years. James was a warm and loving man and friend to all who knew him. Above all, he was a devoted family man whose greatest pleasure in life was spending time with his family. His approach to life was summed up in one of his favorite Biblical references, “I know mine, and mine know me.”