To share your memory on the wall of Janet Livingston, sign in using one of the following options:

Provide comfort for the family of Janet Livingston with a meaningful gesture of sympathy.

After Will died in 2017, Janet moved to Mt. Laurel, sharing a home with her daughter Carol. It was at The Tender that she found a welcoming place for those with dementia. She recently moved to Moorestown, spreading her warmth and fun-loving nature to those around her. Her love of family, especially children and pets, the shore, music and dancing, her easy smile and joyous laughter were apparent to everyone lucky enough to have ever known her.

Janet was the daughter of William and Mabel Shaw, and was predeceased by her brothers Bill, Buddy, and Jack, and sisters-in-law Mary and Edna. She is survived by her sister-in-law Elizabeth, and brother-in-law and his wife Carl and Rosemary Livingston. She leaves her children and their spouses, John and Christine, Susan and Richard, Jim and Laura, and Carol; grandchildren Trevor, Alexandra, Anna, and Robert and his wife Jenna, and three great-grandchildren. She was also a beloved aunt and cousin to many.

Donations in Janet’s memory may be made to The Tender, 4501 Church Rd., Mt. Laurel, NJ 08054.
Services and Interment will be private.
Read Less

Receive notifications about information and event scheduling for Janet

We encourage you to share your most beloved memories of Janet here, so that the family and other loved ones can always see it. You can upload cherished photographs, or share your favorite stories, and can even comment on those shared by others.

Posted Feb 27, 2020 at 09:31pm
To : John,Sue, Carol and my good friend Jim ( and family ). I have fond memories of your mother whenever I visited ,of her singing to Willie most often than not ! Knowing she is at peace and with your father now is a good thing. I know she will be missed but having all the special memories of her will last a lifetime ! I want to leave you all a poem that was read at my mother's service called The Dash. And how it reads true.
Art I read of a man who stood to speak at a funeral of a friend. He referred to the dates on the tombstone from the beginning…to the end.

He noted that first came the date of birth and spoke of the following date with tears but said what mattered most of all was the dash between those years.

For that dash represents all the time they spent alive on earth and now only those who loved them know what that little line is worth.

For it matters not, how much we own, the cars…the house…the cash. What matters is how we lived and loved and how we spend our dash.

So, think about this long and hard; are there things you’d like to change? For you never know how much time is left that still can be rearranged.

To be less quick to anger and show appreciation more and love the people in our lives like we’ve never loved before.

If we treat each other with respect and more often wear a smile…remembering that this special dash might only last a little while.

So, when your eulogy is being read, with your life’s actions to rehash, would you be proud of the things they say about how you lived your dash?

Posted Feb 25, 2020 at 01:02pm
Having grown up across the street in Cinnaminson, I have such wonderful memories of Mrs. Livingston. I would stop by looking for Carol and Mrs. Livingston would have her country music playing in her kitchen. She was always so upbeat and happy. I will always remember her smile and funny sense of humor. My prayers of peace are with the entire family.
Comment Share
Share via: 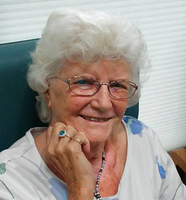