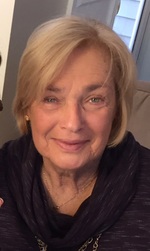 Maureen Sweet (nee Langan), age 76, of Delanco, New Jersey passed away while surrounded by her loving family on Sunday, December 29, 2019.

Maureen was a remarkable woman. Some might say, a saint on earth. Born in Bayonne NJ, to George and Paula Langan, Maureen grew up with her younger sister Georgene and attended Holy Family Academy. She and her sister moved to New York City and worked for Allen and Company. Maureen loved that city life and would often mention that if she hit the lottery, she would buy an apartment there to live it up once again.

Maureen and her sister, Georgene, were lucky enough to globetrot to see the world together in their younger days. The stories they told from their adventures would leave you in stitches from laughter.

Maureen moved to Arizona and Maryland, before settling back in New Jersey to raise her four dear children. Maureen worked for the State of New Jersey in the Division of Law and then for the Department of Transportation for over 25 years. She was beyond thrilled to finally be able to retire in 2008 to spend more time with her family.

Maureen loved her children more than life itself. If you look up the word Mother in the dictionary, you might see a picture of her. She was simply the best. She worked tirelessly to make sure they had a fantastic life, doing this all on her own.

Through the years, if you wanted to find Maureen , your best bet would be looking for her sitting on the sidelines of a sports field cheering on her children. She often laughed and said she should just sell her house and buy an RV and park it at the next sporting event, so she didn’t have to drive all over God’s creation for the next game.

Maureen loved to hit the beach for some relaxation. She would load up the kids in her station wagon, stop at her parents in Toms River to pick up some beach chairs, and take everyone to Island Beach State Park. This was one of her favorite places to be. A little bit of sun and body surfing, riding the waves in, made her so happy.

Maureen was very funny. She loved to have a good time with her family. They would anxiously await her arrival on Halloween to see what costume she had pulled together to surprise them. Her children and grandchildren would erupt in laughter as she would strut through the door, dressed up, announcing, “I’m here!”

During her retirement, Maureen loved getting back to watching her “shows”. Her children would playfully beg her to audition for Jeopardy because there was hardly an answer she did not know. She enjoyed her coffee in the mornings, catching up with her “daytime TV personalities”.

What Maureen enjoyed the most about retirement was her four granddaughters. She was the best “Grandma Maureen” to them. She would often have sleepovers, take them to her park and have lunch dates with ice cream being the main course! Maureen looked forward to her babysitting duties and her grand girls and grand dog cherished their time with her.

What will be remembered the most about Maureen was that she was a selfless, hilariously funny, smart, kind, caring and beautiful lady. She will be eternally missed by all, but especially by her children, her four “cheeky monkeys”. Mama Sweet was already an angel on Earth, so heaven should feel like home.

A viewing will be held on Sunday, January 5th from 2:00 PM to 4:00 PM at the Mount Laurel Home for Funerals, 212 Ark Road, Mount Laurel, NJ. Mass of the Christian burial will be celebrated 10:30 AM on Monday, January 6th at Corpus Christi Catholic Church located at 11 S Sunset Rd, Willingboro, NJ. Entombment will follow at Park View Cemetery, 25 Fostertown Road, Medford, NJ. In lieu of flowers, memorial contributions in her memory can be made to Samaritan Healthcare & Hospice, Development Office at 5 Eves Drive, Suite 300, Marlton, NJ 08053.