To share your memory on the wall of Robert Rende, sign in using one of the following options:

Provide comfort for the family of Robert Rende with a meaningful gesture of sympathy.

Receive notifications about information and event scheduling for Robert

Posted Feb 27, 2019 at 01:56pm
Bob, you were always such a gentle soul and never spoke bad about anyone. I am so glad that Patty and I were able to get most of the first cousins together in your honor. Everyone said that they had such a great time and I know you did too. I will always treasure my Captain Fantastic album. See you on the other side cuz. Love and peace to you.
Comment Share
Share via:
TK

Posted Feb 27, 2019 at 07:49am
Not many people can claim a life-long friendship. Me & Bob were both born in Memorial Hospital, 4 days apart (me being the older). My Mother told me that Bob & his Mother left the hospital earlier, due to my Mother's cesarean section. I don't remember the day I stepped outside of my door, and found Bob. But those were good days when Lincoln Street & our friendship was the whole world.
Comment Share
Share via:
AR

Posted Feb 26, 2019 at 02:42pm
We plant this as a memorial to our dear brother, Bob, who has now finally found peace. May this memorial tree thrive for many, many years, just as Bob will always live in our thoughts and our hearts. Love and hugs always! 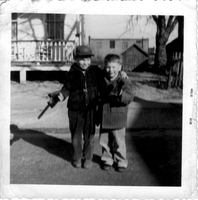