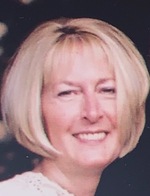 She was the loving daughter of the late William R. and Marian (Alexander) Thompson and raised in
the Holmesburg section of Philadelphia. Ginny’s compassion and enormous capacity for helping
others led her to become a Registered Nurse upon graduating from Gwenydd Mercy College and
later earning a Bachelor of Science in Nursing and a Masters of Science in Organizational
Dynamics from the University of Pennsylvania. During the course of her professional career,
Ginny became a senior healthcare executive and worked at several Philadelphia area hospitals and
an international consulting firm before formally retiring in 1995.

In August 2003, she married her beloved Rich. They treasured every moment together traveling,
golfing, spending summers at the beach in Ocean City and winters in Florida. Most of all, Ginny
and Rich cherished the time that they spent with their family and wide circle of friends in New
Jersey and Florida. Upon marrying Rich, Ginny became mother to Rich’s daughters Lisa Burt
(Stephen) and Diana Sever (Mark) and grandmother, lovingly referred to as “Aunt Gin” to Rich’s
grandchildren – Nicholas Burt, Katherine Burt, Brian Sever, Timothy Sever and Aidan Sever, all of
whom survive her.

Ginny was admired and will be most remembered by her family and many close friends for her
enthusiasm, her competitive spirit, her sense of optimism and her courage. She pursued her varied
interests such as golf, gardening, decorating, reading and current events with an unparalleled zeal
and always with an unwavering certitude.

Family and friends are invited to attend her Mass of Christian Burial on Tuesday, January 5, 2021 at
11 AM at St. Isaac Jogues Roman Catholic Church, 349 Evesboro-Medford Road, Marlton, NJ
08053.

Interment will be private.