To share your memory on the wall of Blaine Salvador, sign in using one of the following options:

Provide comfort for the family of Blaine Salvador with a meaningful gesture of sympathy.

Print
Blaine A. Salvador, age 59, passed away at his home on October 23, 2019 in Mount Laurel, NJ surrounded by his loving family.

He was born in Brooklyn, NY and was a resident of Niskayuna, NY before moving to Mount Laurel, NJ 17 years ago. ... Read More
Blaine A. Salvador, age 59, passed away at his home on October 23, 2019 in Mount Laurel, NJ surrounded by his loving family.

He was born in Brooklyn, NY and was a resident of Niskayuna, NY before moving to Mount Laurel, NJ 17 years ago. Blaine was a devoted husband and father whose life had a profound positive impact on those around him, most of all his family, friends and co-workers. Blaine was a 1982 graduate of Kings Point, the United States Merchant Marine Academy. His most recent position was Senior Vice President for RTI International Metals. In his free time, he liked playing golf, following his favorite sports teams, the NY Giants, NY Mets and Temple Men’s Basketball. Above all, he treasured every moment with his wife and children who adored him.

To honor his wishes, services and interment will be private. Memorial contributions may be made to the US Merchant Marine Academy Alumni Association and Foundation in memory of Blaine Salvador. Please make your check payable to "USMMA AAF" (Tax ID # 11-6037948) with your loved one’s name in the memo section/notes. Either Mail to: 300 Steamboat Road, Kings Point, NY 11024; or make a donation online at www.usmmaalumni.com > Giving > Make a Donation.
Read Less

We encourage you to share your most beloved memories of Blaine here, so that the family and other loved ones can always see it. You can upload cherished photographs, or share your favorite stories, and can even comment on those shared by others.

Posted Nov 27, 2019 at 09:45am
The tree is judged by the fruit it produces, Blaine was good.
"Life is eternal for the good"
Comment Share
Share via:
BS

Posted Nov 04, 2019 at 08:46pm
Dearest Nandy and Madalyn,
We are so sorry for your loss and will have you and your family in our thoughts and prayers. We hope you will soon find peace and cherish all of the beautiful memories you have of your son. May he rest in paradise.
With love, Chris and Nancy
Comment Share
Share via:
JK

Posted Oct 29, 2019 at 08:04pm
So, it's inherently difficult to capture a lifetime of shared love, friendship, brotherhood, and remarkable times that Blaine & I enjoyed for over 50 years in a short paragraph. Some things like feelings and memory's are intangible which do not have a physical value like tangible's that can be touched and felt with your hands, I prefer the intangible, because although Blaine & I will not embrace physically until a later time, his spirit, unpretentious nature, sincerity, unconditional affection, and kindness has nourished my soul for many years, and will be infinite as long as I draw breath on this earth, Blaine is, not was, a kindred spirit full of warmth, laughter, and generous to a fault, when Blaine gave of himself in friendship you got it all, and then some, a finer man, father, husband, son, brother , and friend couldn't have been sculpted better by Michaelangelo himself.

It had to be late spring 1982 when Blaine graduated from Kings Point, a month or so later he accepted a job as an engineer with General Electric way up there in Schenectady, so far away from Old Silver Tavern, the Yorktowne Inn, and the Stone Pony where us boys would toss a few on many occasions. Well I thought this was going to suck, no Ernie (Blaine) to share brews with and talk about nothing but enjoying it all while slightly under the artificial inspiration of Marlboro Red's, Heineken;s, and Kamikaze shots, at least not until periodic holidays presented themselves. So mid summer Ernie had to go through an orientation, and 3 day training for G.E in Schenectady, reality of him starting life's new journey was sinking in... however I was not going to allow this to happen without some form of celebration, or possibly revolt?

Mr. Bob Bobby Murray & I decided to "Piggy back" a ride with Blaine to Schenectady, I mean someone had to keep an eye on him as he headed to the big city , or at a minimum see what our pal was getting himself into. We jumped in Blaine's shiny new Toyota Corolla hatchback (the Brown Bomber) and off we went into the unknown. The three Musketeers we thought out for adventure, in a birds eye view one might say the Three Stooges, always a folly, and a poignant moment of sheer sophomoric nonsense would surely bare presence which usually was fueled by a fermented, carbonated Barley & Hops. Hey why not join Blaine in upstate, NY, G.E was paying the hotel? "No brainer" for sure

While Ernie toiled away training for his new position, Bobby & I pounded the pavement in Schenectady for a few days lending our support to many local "bucket of blood" bars, taverns, and watering holes of nefarious nature with scantily clad local female denizens with objectionable character, I'm thinking boy is Blaine missing out!!! This is much better than a mature, responsible job training, once again I was delusional .

Blaine got out of work in jacket & tie, bobby & I were dressed like two Jersey shore Mutts, somewhat disheveled from a long afternoon of bending elbows in the combat zone. Blaine suggested we dine at Jack's Oyster house in Albany, which by all means was a "stodgy" landmark with white tablecloths and a utensil set on the table for each course that "gin nosed" upper crust politicians dined, it appeared to me, at least Bobby & I were not blending !!! Blaine was like F$ck em, we got cash !!! The waiter who looked older than the restaurant itself came over in a red jacket with gold buttons, you know the type, and said Bobby & I could not stay without wearing a jacket, blaine who had a jacket on seemed like it would be dinner for one mmm!!! Blaine asked the waiter if he had a blazers in the back or coatroom we could borrow, good thought Ernie, the waiter perplexed with the query quickly acquiesced after Ernie hit him with a $20.00 spot, let the games begin!!

We dined on filet Mignon, Lobster, clams, and had the meal of a lifetime celebrating Blaine's newfound comeuppance in our thrift store borrowed jackets in an establishment meant for those of stature, and promise. The table was filled with what seemed like 100,000,000 empty Heineken bottles, shot glasses, and dry bourbon snifters with frayed shards of wet cigar tobacco we dipped in Crown Royal , doesn't get better than this. The waiter came over with the check, was around $250.00, back in 82 that was a tidy sum, and said "what capacity are you guys in"? i guess he wondered how three young man-children could afford this type of night... He left for a minute, Bobby & I had no clue a this capacity thing, we looked at blaine looking for an answer. Blaine intimated he wants to know what we do for a living, OK , we know Blaine's an engineer, Bobby just got out of a cast after breaking his leg and was out of work, and I was in between "slinging hash" jobs and going to school part time, Capacity, more like incapacitated!!! The waiter came back and reiterated the question, "what Capacity are you in", Blaine said he was an Engineer with G.E, the waiter looked & Bobby & I looking for an answer, Bobby looked at Blaine, then the waiter, then pointed to Blaine and said "were with him" !!! For lack of a better answer, it fit, when Blaine made it to that level, we all made it, we were proud, filled with adulation that are brother was fulfilling his promise with such passion. when Ernie succeeded we all succeeded, when we hit our high notes sometime later, Ernie applauded , and encouraged us with his unrivaled gift of love, benevolence, and friendship, at it's core Ernie is just Ernie, cant be duplicated or cloned. Godspeed my brother, love you eternally

Posted Oct 29, 2019 at 02:56pm
Paige, Shaine, and Tyler I'm so sorry for your loss. Blaine was a great guy. I very much admired his commitment to his family above everything else in his life. May your memories of his character, integrity, and love guide you always.
Comment Share
Share via: 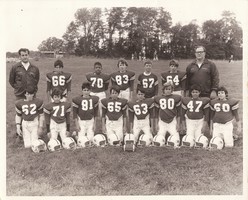 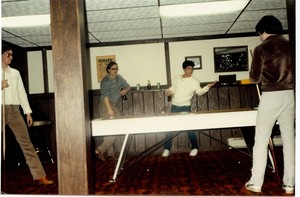