To share your memory on the wall of Edward Zehler, sign in using one of the following options:

Edward was predeceased by his wife of 68 years, Marie, in 2017. He is the son of Edward Peter and Florence (Distler) Zehler and is survived by his seve... Read More
Edward M. Zehler, MD, passed away in the loving arms of his family on July 16, 2020.

Edward was predeceased by his wife of 68 years, Marie, in 2017. He is the son of Edward Peter and Florence (Distler) Zehler and is survived by his seven children, Annette (Rick), Daniel (Nancy), Ellen (Frank), Marcia (Patrick), Steven, Carol (Todd), and Virginia (Bruce); 17 grandchildren; and two great-grandchildren.

Edward Michael Zehler was born at home in Niagara Falls, New York, on November 18, 1923, 20 minutes after his twin brother Richard. Edward spent his childhood in Niagara Falls and Buffalo, and his summers on a family farm in East Bennington, New York. In eighth grade, he won a scholarship to St. Joseph’s Collegiate Institute and graduated in 1941. From there, he went on to Canisius College where he met his future wife, Marie Scheier, who worked in the college library. It was during this time that he enlisted in the Marine Corps Reserve. In 1943, the Marines moved Edward out of Canisius and sent him to the University of Rochester where he continued his studies and began his military training. Edward was called into active duty as a first lieutenant from 1944 to 1946, serving tours in the continental US; in Hawaii, where, among his duties, he was the leader of a platoon of Navajo soldiers (known for their contributions as “code talkers” during WWII); and finally, in Japan as part of the U.S. occupation force.

After returning from Japan, Edward completed his B.A. at Canisius College and, in 1947, began his studies at the University of Buffalo School of Medicine. In 1949, Edward married his sweetheart, Marie, and they settled at first in Buffalo.

After graduating from medical school in 1951, Edward completed his internship at Erie County Edward J. Meyer Memorial Hospital in Buffalo. Then Edward and his family moved to Coatesville, Pennsylvania, where he completed a three-year general psychiatric residency. In 1954-55, he undertook training in neurology and psychoanalysis. Edward completed additional residency training in child psychiatry, including rotations at the University of Pennsylvania, Temple University, St. Christopher’s Hospital for Children Child Psychiatry Clinic, Jefferson Medical College and Hospital, and Hahnemann Medical College, where he eventually served as an associate professor of child psychiatry from 1964 to 1984. He was a diplomate of the American Board of Psychiatry and Neurology, and a diplomate of the National Board of Medical Examiners. He served as an instructor in child psychiatry for the University of Pennsylvania School of Medicine, and served as a lecturer on the Psychological Development of the Child at Hahnemann Medical College.

At Our Lady of Lourdes Hospital, he was on staff for over 50 years. During this time, he was also on staff at multiple hospitals throughout the South Jersey area, such as Virtua Memorial Hospital, Zurbrugg Memorial Hospital and Rancocas Valley Hospital, among others. He provided services to various child-focused clinics and resources including the Philadelphia Child Guidance Center and the Child Guidance Center of Camden County, the Camden Home for Children, and was chairman of the Drug and Alcohol Advisory Committee at West Jersey Health System (now Virtua). He served as director of the Hahnemann Child Psychiatry Resident Training Program, and chairman of the Child Psychiatry Resident Training Committee at Eastern State School and Hospital. Edward also served as medical director of Crisis Services at John F. Kennedy Memorial Hospital (now Jefferson Health), a consultant in child psychiatry for the Moorestown School District, medical director of Center for Family Services of Burlington County, and past president of the Southern New Jersey Chapter of the American Psychiatric Association, among various other positions held.

Edward maintained his private practice from 1955 to his retirement in 2006, serving as director of the Evaluation and Treatment Center, located in Moorestown, New Jersey. After retirement, Edward continued seeing patients on a volunteer basis for several years at a healthcare clinic for the homeless in the City of Camden

Despite early plans to return to Buffalo, Edward and Marie remained in South Jersey, where they raised their family of seven children, settling in Moorestown, where they lived for almost 50 years. Eddie and Marie enjoyed travel, annual family trips to Sea Isle City and many trips throughout the years back to the Buffalo area to visit family and friends. Edward enjoyed music, art, reading, tennis and basketball which he played into his 80s.

Edward is known and loved for his playfulness and fun sense of humor, and admired for his great patience, work ethic, kindness, and genuine caring for others.

Due to the current pandemic, funeral services will be private. A more public celebration of Edward's life will be held at a later date.

In lieu of flowers, donations in Edward’s memory may be made to Project H.O.P.E. - Camden Healthcare for the Homeless https://secure.donationpay.org/projecthopecamden/Read Less

Receive notifications about information and event scheduling for Edward

We encourage you to share your most beloved memories of Edward here, so that the family and other loved ones can always see it. You can upload cherished photographs, or share your favorite stories, and can even comment on those shared by others.

Posted Jul 26, 2020 at 10:15am
My deepest condolences to the family. Words fall short of expressing my sorrow for your loss. Sincerely, Jim Cleary
Comment Share
Share via: 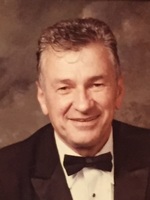