To share your memory on the wall of Eugene Ziegler, sign in using one of the following options:

Print
Eugene Paul Ziegler, of Mount Laurel, NJ passed away on Wednesday, January 30, 2019, in the comfort of his home. He was 82 years old.

Mr. Ziegler was born and raised in Philadelphia, PA. He had been a resident of Mount Laurel for the... Read More
Eugene Paul Ziegler, of Mount Laurel, NJ passed away on Wednesday, January 30, 2019, in the comfort of his home. He was 82 years old.

Mr. Ziegler was born and raised in Philadelphia, PA. He had been a resident of Mount Laurel for the past 41 years. He was an active communicant of Saint John Neumann Roman Catholic Church, in Mount Laurel, where he served as an Usher and a member of the Knights of Columbus. Mr. Ziegler worked as a manager at Pathmark supermarkets, in various locations throughout the area. In his leisure time, he enjoyed watching the Phillies and the Eagles, and working on wood projects in his tool shed. In his younger years, he enjoyed golfing and bowling with his nephews.

A visitation will be held on Monday, February 4, 2019, from 8:45 to 9:45 AM, at the Mount Laurel Home for Funerals. The funeral mass will be celebrated on Monday, February 4, at 10:15 AM, at Saint John Neumann Roman Catholic Church, 560 Walton Avenue, Mount Laurel. Final disposition will be private. In lieu of flowers, memorial donations can be made to the ASPCA or Humane Society.

Receive notifications about information and event scheduling for Eugene

You will receive any future notification messages.
Print

We encourage you to share your most beloved memories of Eugene here, so that the family and other loved ones can always see it. You can upload cherished photographs, or share your favorite stories, and can even comment on those shared by others.

A donation was made in memory of Eugene Ziegler
Comment Share
Share via:
Posted Feb 01, 2019 at 10:34pm
Uncle Genie, I’m so sorry it took so long, but you made a difference, you made me smile, you brought me laughter, the kind of laughter only a Ziegler could give. I loved your stories, a lot of them I never knew. And I will remember every one of them. I want to thank you for those memories, I will keep them tucked away inside my heart until that one sweet day when we are all together again. See you on the other side of the stars my dear uncle. Judie Ziegler Alliano
Comment Share
Share via:
HI

Posted Jan 31, 2019 at 07:57pm
When I would go visit I went through the always opened garage door, I then would know and open the door into the den. Uncle Genie would say Marge I told you to keep the door locked to keep out the rift raft. Never got old each and every time . I'll miss him and Aunt Margie and Miriam we are so sorry for the loss of your dad and husband😔

Comment Share
Share via:
Posted Jan 31, 2019 at 02:21pm
My deepest sympathy for your loss. He was baptised in Christ and will share in His resurrection. May perpetusl light shine upon him an through the mercy of God may he rest in peace. 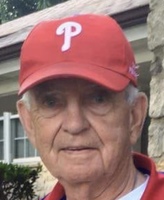