To share your memory on the wall of Nora Callahan, sign in using one of the following options:

Provide comfort for the family of Nora Callahan with a meaningful gesture of sympathy.

Print
Nora (Nee Magsam) Callahan, 90, passed peacefully on Friday, August 2, 2019 in the care of the Samaritan Hospice in Voorhees, NJ.

Born at home on September 29, 1928 in Philadelphia, PA, Nora was the fourth of nine children and the firs... Read More
Nora (Nee Magsam) Callahan, 90, passed peacefully on Friday, August 2, 2019 in the care of the Samaritan Hospice in Voorhees, NJ.

Born at home on September 29, 1928 in Philadelphia, PA, Nora was the fourth of nine children and the first daughter of Harry and Nora (Nee Dunn) Magsam. Growing up in a large family, Nora spent time avoiding work in her father’s store and worked on the yearbook staff before graduating from Little Flower Catholic High School for Girls in 1946. She married Edward Callahan in 1954 and gave birth to four beautiful children. She worked in various positions throughout her life and spent 20 years as a bookkeeper at New Road Construction in Cherry Hill before she retired at the age of 75. She spent the last 4 years living independently at Brightview Greentree where she made many friends and took advantage of a variety of activities. Nora was affectionately known by family members as “Spicy”. She enjoyed reading, cross-stitch, sewing and Sudoku. Her favorite times were spent at the beach surrounded by family and friends.

Family and Friends are invited to attend her viewing on Tuesday August 6, 2019 from 5-7 pm at the Mount Laurel Home for Funerals 212 Ark Road Mount Laurel, NJ 08054 and on Wednesday August 7, 2019 from 9:15-10:15 at St. Isaac Jogues Church 349 Evesboro-Medford Road Marlton, NJ 08053. Her Mass of Christian Burial will be celebrated on Wednesday August 7, 2019 at 10:30AM at St. Isaac Jogues Church immediately followed by interment at Parkview Cemetery at Kirby’s Mill, Medford, NJ. In lieu of flowers, donations in her memory may be made to Samaritan Hospice 5 Eves Drive, Suite 300 Marlton, NJ 08053 or at https://samaritannj.org/giving/donate-now/
Read Less

We encourage you to share your most beloved memories of Nora here, so that the family and other loved ones can always see it. You can upload cherished photographs, or share your favorite stories, and can even comment on those shared by others.

Posted Aug 05, 2019 at 02:00pm
Sadly, I cannot attend the Memorial events and funeral of my older sister Nora, who was the Matriarch of the Magsam family after our Mom died. We girls shared some very close quarters in our parents' tiny row home so a small bedroom, closet, and vanity was shared. When we girls were grown and had jobs, Nora was the last of us girls out of the house, therefore she had her pick of all of our outfits before leaving the house out of our view! As far as not working in our Dad's store was concerned, since Claire, Grace and I were willing, Nora declared that she preferred to help our Mom with her duties at home. Nora was a great achiever in her school studies, won a full scholarship to a parochial college but, unfortunately, had to help our Dad with expenses. She finished her college education after she had married and had children, again with honors academically. My prayers, love and thoughts are with all of our family members who will miss her presence with us. Eternal Rest grant unto her, O Lord, and let perpetual light shine upon her. May her soul and the souls of all our deceased loved ones, rest peace through the Divine Mercy of God, Amen. I believe you have seen the Lord, dear Nora, and would not wish to be anywhere else but in His Presence! JUNE
Comment Share
Share via:

Posted Aug 05, 2019 at 08:38am
Spicy was one of the first relatives to graciously invite me into the family twenty years ago. She was a larger than life personality and was never shy to tell you what she thought. She was quick with a clever quip and always a joy to talk to. I’ll never forget our chats on the beach in Ocean City with her in the oversized beach wheelchair with the big wheels, sharing pearls of wisdom from 90 years of a blessed life. Thank you, Spicy, for your love and creating such wonderful children/grandchildren too, our dear cousins. “In peace I will lie down and sleep, for you alone, LORD, make me dwell in safety.” Godspeed.
Comment Share
Share via:

Posted Aug 04, 2019 at 08:30pm
Some of my best memories involve, one beautiful woman, my Aunt Nora. I remember going to visit her as a child, she was always kind, funny and interesting. For a time she came to live with us, we went to the library, played scrabble and she helped me with homework. We saw exciting movies, Indiana Jones and the Last Crusade was her favorite. Later when I had dreams of going to college she was supportive. After my mother passed away she took care to be kind and attentive to my children. She selected beads for them to make rosaries and let them do silly things for her like decorate her cane. Most of all she listened when I talked to her and gave advice that came from her heart. I am sad because she is not going to be a living part of my life anymore but I am only sad for losing her, I know that she is in a blessed a wonderful place. Love and peace to all who knew Nora (spicy) Callahan. 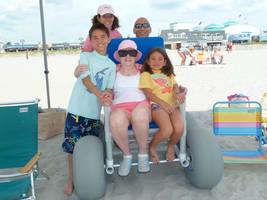 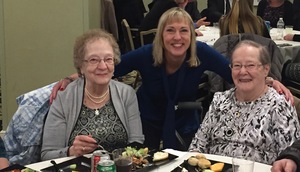